After quite some time, I am finished with this leader/ender project: 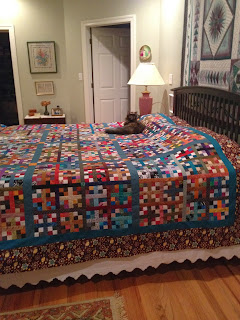 It is based on a quilt in the book Small Pieces, Spectacular Quilts by Mary Elizabeth Kinch and Biz Storms.  I made 4 patches from 1.5" squares over a couple of years, then they became groups of four four-patches, then larger groups of four sets, all with 1" sashing between the units.   There are many of my favorite fabrics in here and all are from projects I've made in the past 10 years.  It's like a reunion looking at them as the quilt top was completed.

As I'm a number person it seemed reasonable to count the squares when the top was done.  Not including the two outer borders, there are 1957 squares and rectangles in the body of the quilt.  It is a gift for my sister who was born, wait for it... in 1957!  Weird, right?  She had fussed at me some time ago that I never made a quilt for her so I've been working on this for a while.  I told her I'd make her a quilt for her 60th birthday so at this point I'm more than 3 years early.   Now it's on to the longarm quilter and eventually to my sister--sometime in this next year I guess.  No problem, she does not read my blog so she won't know.

This was the perfect leader/ender project.  By that I mean, I keep a container of light 1.5" squares and dark 1.5" squares right beside my machine.  As I start or end a row of stitching on every seam I sew, I grab 2 squares, one light one dark, and join them--then they get joined into a four patch and set aside until I need four-patches.  It's a way to create pieced units as you work on a project.  If I had decided to just make this quilt, all at once, I'd have gone crazy--there's just too much piecing and it's all squares and rectangles.

Every quilter who has a cat knows that as soon as you spread out a quilt, anywhere, the cat will immediately appear out of nowhere and jump on it.  Patches did just that.  Sadly, her "brother" Stitches, is quite ill and will go back to the vet tomorrow.  We think he ate Christmas cactus.  It's touch and go today so I hope to have better news next report.

Check out Judy L's blog to see what others are up to.

Barbara
Posted by Barbara Black at 3:00 AM