My Hospital Stay OR Why BOTH of us were admitted

Here's the story of my week:

In preparing for total knee replacement on Monday August 20, I told my husband I needed him with me much more than last time, when he spent about 20 minutes a day with me after work.  He took this week off from work so he could be at my side as much as I needed.  I also told him to get a good book or two, as he would mostly be sitting in my room.

The day before we worked for 3 hours in the yard, as usual, and he didn't drink anything while doing that--I drink a lot of water each time we work out there.  Monday morning he had a small breakfast before we left for the hospital at 5 am.  I reminded him to bring a book, but, no, he'd be fine.  So, while I'm in surgery, he decides to give blood!  He did not drink anything afterward, saying he'd be fine and would drink something later.

I got to my room about 11 am, feeling pretty good considering the major surgery I'd just had.  At noon I told him I was a little woozy and he said he was too.  I turned to look at him, he was very pale, and then he said "Hit the call button".  It took a second for me to get what he was saying but when I looked at him again, he was totally passed out, pale as a ghost, jaw slack, head hung back.  Gone.  I buzzed for help, RNs come right in but go to me first, thinking I'm the one with the problem then see him.  "CAll for the crash cart!"  Many people come running and fortunately, my nurse, Adam, remembered Will said he had given blood.  They got juice into him and had to persuade him to go to the  ER--at first, he said "No, I'll be..."  Yep, FINE!  They take him to ER and more than 8 hours later he was admitted for further monitoring.  He was a patient until Wednesday noon when he went home to shower, change, grab lunch and come back.  I didn't see him during this time though we spoke on the phone from time to time.  So I can't say he wasn't in the hosptial with me this time, he just wasn't "with" me!

I had to call my local son to have him go to the ER to stay on top of the situation there.  His wife arrived mid-afternoon, so they could split their time between us.  They contacted my Nashville son, who arrived at 11:15 pm, once Will was admitted.  He only stayed until the next morning but at least my husband could quit worrying about the house!  Joshua has a wedding to shoot in Marfa, TX today and tomorrow so he flew to Austin yesterday and just couldn't stay with us any longer.

The good part of this is that I didn't worry about myself at all--everything went very well for me.  Until he was admitted I just tried to prepare myself for seeing medical personnel and a chaplain come to me.  He could have been gone, he now realizes that, and it was just lucky that he was sitting in a hospital room when he blacked out.

I got home yesterday, have done well with hospital therapy and home therapy today.  I mananged to get the same home therapist I had 5 years ago, I really like her and was glad she was still there.

Each day will see some improvement and eventually, I'll be better than I was.  It's a very slow process but I know I will get there.  No photos this post--you don't really want to see a big bandage on my knee, right?

Now I'll take a little nap, then dinner--he's being extra sweet to me now!  It's hard for a patient who prefers to be left alone to be all about the needs of a patient who wants to be taken care of!  He's doing better each day.  But I think he was relieved when I told him a little while ago, he should plan to return to work Monday--I've got quilting friends coming each day to make/bring my lunch, and with therapy twice a day, and resting in between, I'll be "FINE"!

Please quilt something this weekend and think of me--I may not be up to working on all the projects I prepared just yet!

I've been preparing for my knee replacement surgery, set for August 20, so have been working on lots of things I wanted to get done.  Mostly, getting handwork set for my recuperation time.

But the other day I realized I had all the parts for my guild 2013 quilt show raffle quilt and it was time to put it together.  After 3 hard days of doing little but this, the top is finished and has been delivered to the quilter--yeah! 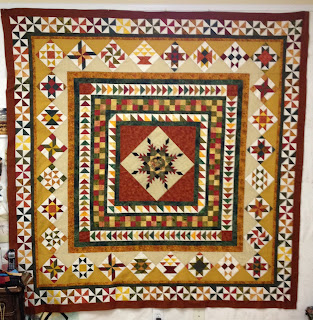 pattern:  Washington Medallion by Sue Garman, available as a block of the month from Quakertown Quilts

This is the fourth one of these I've made in the last 3 years and I believe I can say, I'm done!  I love this pattern and have enjoyed the process but it's time to do something else--and I have lots of things in mind.  I'll be happy when this is quilted and bound.  The guild will get to see it in October.  I hope it sells LOTS of tickets!

By the time some of you read this, I'll have survived surgery and begun the rehab process.  Then the hard part--losing the weight I want/need to lose, to protect my joints.  I know how to lose weight, my biggest problem is keeping it gone!  I'm sure some of you can relate.

Don't know when I'll get to post again but, in the meantime, let's quilt!

After a break of more than a year, I got back to my Ruffled Roses, the 2011 BOM from www.thequiltshow.com. Here is where I am today: 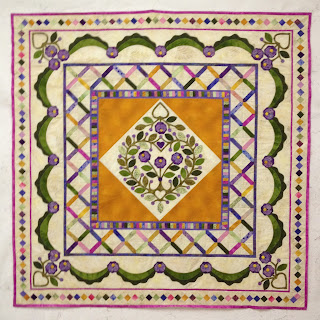 This is as far as I'll get in adding to the center for quite a while because the next 8 sets of instructions involve making basket blocks and elaborate pieced swag borders.  So lots more piecing but I love how it's coming!

This week I'm gathering hand projects and some machine piecing projects together so I can easily work on them when I feel able--next Monday August 20, I'm having my right knee replaced.  Five years ago I had the left replaced so I know what to expect.  That's both a blessing and a curse!  Not looking forward to this but it needs to be done so I can walk/exercise/live more easily.  Wish me luck!

Be sure to check out Judy's blog for more inspiration!

Since I got home from Long Beach, CA last Monday, I've been working hard to get several things done.

First, I had to do this: 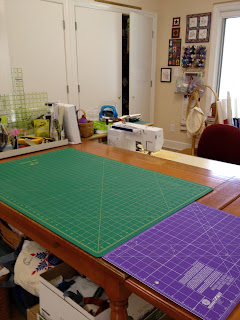 A clean cutting table--amazing!  I can lower the table to match the height of the sewing cabinet, perfect for machine quilting and attaching bindings to large quilts.

Then, I quilted Josephine's Knot and almost have the binding done: 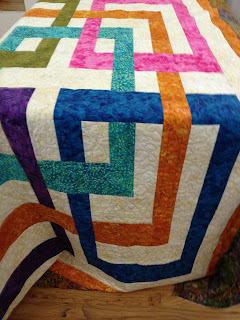 I'm hand quilting a small quilt--both of these are samples for fall classes at my local quilt shop, Patches & Stitches and I need to get them DONE.

I got caught up on the Just Takes 2 Red/White blocks, through August 1--the next set come out August 15.  Here they are in no particular order: 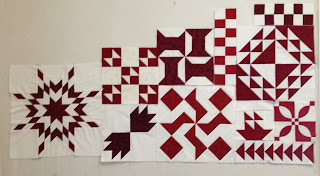 Then I got working on swap blocks for a group swap--X Blocks--it took the better part of an afternoon to find all the fabrics to use.  Each person provided a focus fabric and decided if they wanted their X to be fat, normal, or skinny.  After gathering all these fabrics from my closet I was rather glad we only got 7 people to participate! 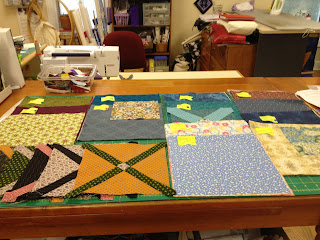 Each of the stacks have 6 fabrics, of various color and value, that get shuffled to create 6 finished X blocks.  The blocks on the lower left are mine I made as samples for the demo. These will be fun to make, and they sew up quickly.

This week I have several medical appointments and I'm teaching a class Tuesday evening on borders and bindings.  Mostly, I have to get those 2 class samples done and delivered.  Off to it!

Be sure to check out Judy L's Design Wall for more inspiration.