How Does This Happen?

That I have so many projects to work on at once?  Today I was sewing on 3 different projects, one that just has to get done as a class sample, one I need ready in a month, and one was just a Log Cabin leader/ender project.  Three at once, all on or very near my sewing machine--that's crazy!  And I have a bunch of string blocks to make for a swap, deadline is the end of March.  That's next week's project.

The Simple Whatnots Club #2 met last Friday night and 25 of the 30 folks were there to get their patterns and fabric packets.  Boy, did they shop!  We hold the entire Kim Diehl collection back from the shop floor until March 1 so only club members can buy it right now.  They know much of it will be gone by then so they added to their stash now.  We emptied 4 bolts that night.  Today I finished the top for February's class and later this week I'll start on the March project.


Last week I showed the Barn Stars blocks, with a few size alternative options.  Rather than make all these little quilts this time, my plan is to make several of the  various blocks in the quilts, in various sizes and then create a sampler with them.  Of course, I made the entire Hen Pecked but it is pretty little.
I'm having fun with Stars in a Time Warp:
I got back to my sample for our guild Quilt-In.  Even though it's in July, the sample has to get done now.   From the first time I saw these blocks on the Internet, in 2011, I've loved them.  The quilt that started this was entered in the 2011 Tokyo Quilt Festival by Setsuko Inawaga.  I have been unable to find a photo of her quilt but the Internet went wild and lots of swap groups popped up.  The block is actually an old Spool Block, Brackman #1970, attributed to Nancy Cabot, 1938.  But done in bright colors, it sure looks Modern!


The other day I picked up my quilt, Color in Black and White, from the quilter, Melissa Labella.  She did a great job on it, a real custom job, each color has a different quilting pattern: 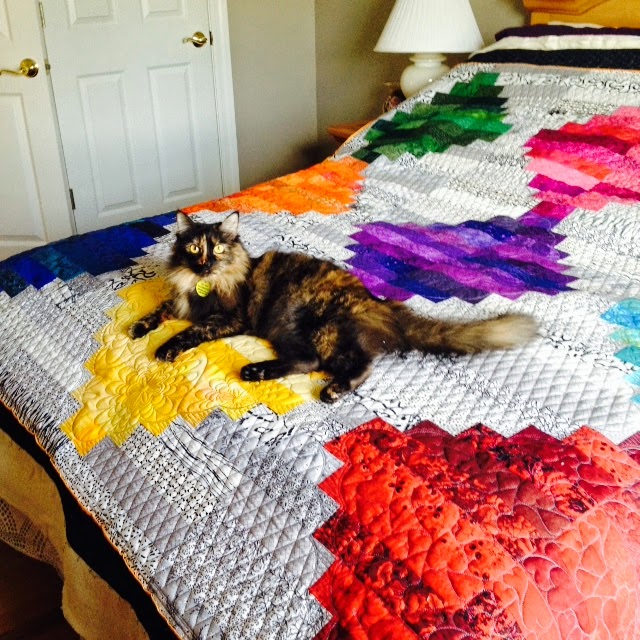 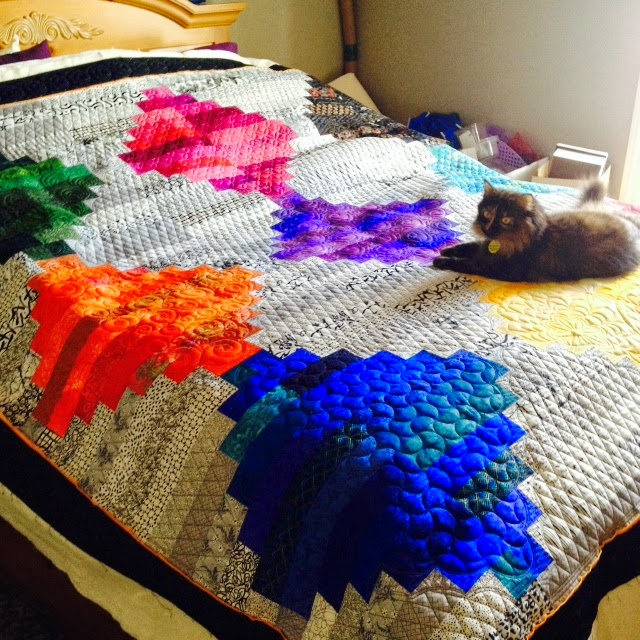 Now I have to trim it and add the binding and sleeve.  BUT FIRST, I  have to clean off the cutting table and around my sewing machine--this is a big quilt and it's heavy, there are two layers of batting in it.  And it gets the "Patches" seal of approval, she loves to be in the picture.
Time to head out to teach my beginner's class, the second of 3 sessions this winter.  I love teaching beginners and doing my best to get them hooked.  Here is the project they make:
It is challenging enough that they really learn something and I am usually successful at my goal of addicting at least one of them totally to quiltmaking.  About half of them do the pieced border and half choose simpler borders.  Whatever they want to do, is fine with me.
Let's quilt!
Barbara
﻿
Posted by Barbara Black at 1:40 PM