Begun in January 2011, this quilt, Ruffled Roses, was the Block of the Month on The Quilt Show that year. Designed by the late Sue Garman, the pattern is still available on her company website: Come Quilt. 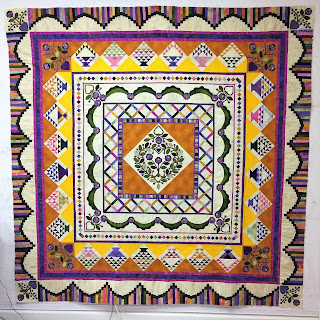 I have written about this project several times over the years, including these posts:

Step By Step on the Machine Applique'

The last time I worked on it

Perseverance is a good thing. A friend asked me why it took so long--did I not like it or did other things get in the way? Most quilters know how the excitement of starting a new project gets in the way of finishing our UnFinished Objects (UFOs). That's what happened here.

The pattern has you making four of the 6" basket blocks and 3-4 of the border sections each month. I kept up in 2011 until the middle was done then it was put on the back burner as life and other quilts intervened.

Recently, I decided it just had to get done. Here is what I had accomplished up to that point, plus half of the border sections: 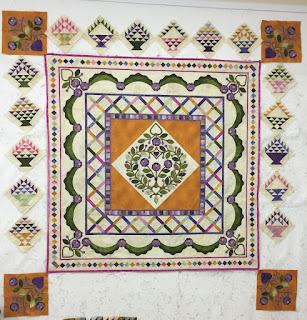 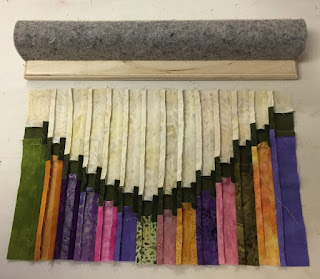 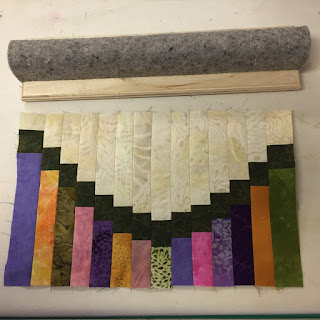 Last week I was able to clear the decks and figured that would be enough time to get the top completely done. Well, it took 9 days of working 9-5 to complete the top. Each morning I woke up earlier and earlier, just so I could be ready to work on it by 9. After getting up at 4:30 a.m. the last day, it was really good to be DONE.

In the category "Living Right"--this is how much of the bright pink marble fabric I had left after making the final set of floater borders: 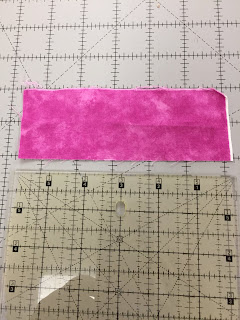 Sue was a friend of mine--I wish I could show her that I really did get it done. She liked my fabric selections and was an enthusiastic quilt friend to me and others. I miss her still.

Now it will go to a great longarm quilter who will do it justice. Then it is part of my "Legacy Collection"...

Time to do all the things I didn't get done over the last two weeks.

Barbara
Posted by Barbara Black at 4:00 AM