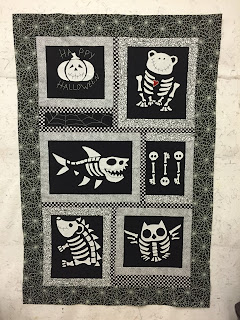 This project has consumed me for a week. The top is done, now to baste and machine quilt it.

What you need to know: I am not much of a Halloween fan. It was always a challenge to create costumes for my boys when they were little then we were surrounded with candy for weeks after. Ugh.

BUT. My son, Andy, LOVES Halloween and always has. He and Lauren start decorating their home October 1, watch at least one horror movie a day for all 31 days, and can't wait for October 31. When he met Lauren and she agreed to go to Zombie Prom with him, where everyone dresses up as Zombies with incredibly ghoulish makeup I told him he'd better keep her. A woman with an education and a job, who loves that kind of thing too? She's a keeper.

SO, when I had Lauren and Andy go into Market in St. Louis last May I should not be surprised they spotted this pattern and took photos and got booth numbers. I wanted them to see all the different kind of quilts, garments, accessories, and other things at Quilt Market, different from the kind of quilts I make. They sure did. Later I bought the pattern, and got glow-in-the dark thread as the pattern suggests for the satin stitching around all those pieces.

Some of those pieces are really tiny. First, I had to trace all the patterns onto fusible web. Then fuse and cut them out of white fabric. Next, I fused the pieces to black backgrounds. Stitching around all those  pieces took a few days.

THEN, there were hundreds of threads to be pulled to the back and tied off. I got my husband  AKA PopPop, involved in this step. His first, and probably last, quilt project. Such sighing and fussing you've never heard: 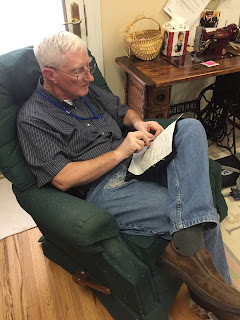 What you should know about glow-in-the-dark thread: it MELTS when touched with a HOT iron, as I learned when pressing the sashing in place. The pattern warned of this, I learned the hard way. The other thing is the Superior Glow-in-the-Dark thread has 80 yards on the spool--I bought 2 spools thinking that would be plenty--there was about 36" of thread left on the second spool when I finished. Glad I didn't melt more than a few spiderwebs that had to be restitched.

The border fabric is also Glow in the Dark spiderwebs--I found it online in an Etsy shop.  It really does glow in the dark though I can't get a photo to prove it: 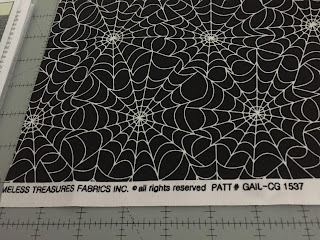 The final part of quilting and binding and shipping it off to St. Louis will be the fun part of this project. I hope to have that done in a few days. That might be wishful thinking as I have 2 out of state teaching jobs this month and start several local classes too.

If you are interested in a slightly-used copy of the pattern at a great price, let me know. There will not be another one of these in my future. I will say the directions were excellent: 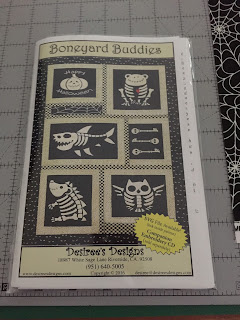 Posted by Barbara Black at 4:00 AM