DISCLAIMER: This is a post about our new cat. If you're not a cat person, come back a few days from now when it will be quilt stuff once again.

It's been some years since we had cats, about 8 years ago now.  I have always loved cats. One cat is fine with me. Eight years ago when I decided to get a kitten, my husband insisted we get two, so they would be companions, playmates. So we rescued two kittens--read about that adventure here: Kittens

One was a love, the other evil. The bad one attacked the sweet one and he had to be put to sleep. Read that sad story here. Within a year, it was clear Patches had to go. She was attacking us daily, insisted on being outside and would kill squirrels larger than she was and deposit them at the back door frequently. The vet said a cat that attacked her humans was not a happy cat and it would be best to put her down. So we did and I was pretty sure that was it for me with cats.

Enter Goldie. My son lives in Nashville and he and his girlfriend have 3 indoor cats. As he has a heart of gold, he feeds the neighborhood strays. A couple weeks ago, this little girl showed up, skin and bones, starving: 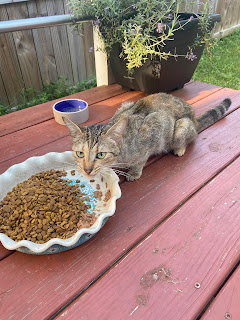 She ate as much as she could handle, then jumped in his lap for a purr and a cuddle. Other than being undernourished she seemed in good health. They checked for a chip, she didn't have one. They gave her a safe place to stay that night, an outside greenhouse Joshua built. but she was gone in the morning. Later that day she was back for more food and more cuddles. And she wanted IN the house. This is odd for wild cats so she might have been a pet who was dumped.
They brought her into the guest room because their cats wanted no part of a young one around, nor was she interested in them. She used the litter box from the beginning and continued to eat well and fill out a bit. Joshua and Cait spent time with her each day and declared her a sweet, loveable cat who needed a home.
I caved. I told him to get her checked out and if she was healthy, I would take her. The vet said she is about a year old as all her baby teeth are gone, 6 lbs, all tests negative, clean ears, all the good things you want when getting a young cat checked out. Personality was most important to me and Joshua kept telling me how sweet she is. He named her Goldie and that stuck.
Here she is on her first day with us, still skittish: 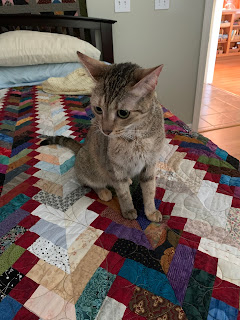 This is her favorite spot--in the kitchen, where she can see her food bowl and the living room: 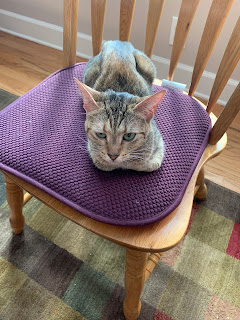 The second night she jumped in my lap for a cuddle, purring loudly. That only lasted a few minutes but it's a start: 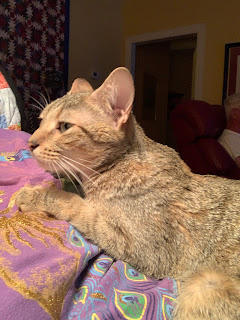 It's hard to photograph a cat in your lap. This is now a nightly routine: 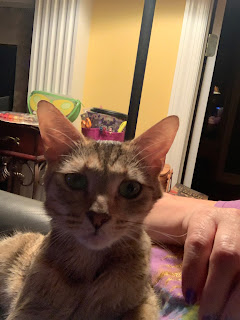 In the morning she will play for just a few minutes, then it's nap time again: 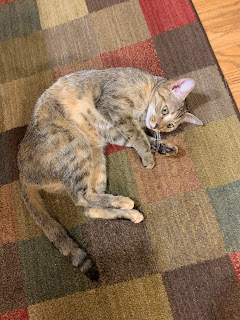 She is still skinny but starting to fill out a bit. And she loves that chair: 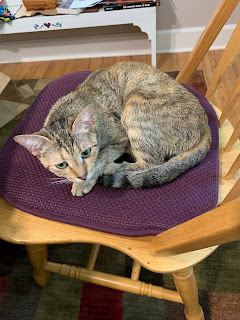 Next week she has an appointment to be spayed. I will be interested to see what the local vet says about her.
I describe her as an "odd" little girl. What she doesn't do:
1. come into our room at night, though the door is wide open
2. play with toys, paper bags, anything typical young cats love to do
3. jump up on surfaces, like the kitchen table or my sewing machine
4. spend time in my studio--she came looking for me there a few days after she arrived, walked around the room, then went back to her kitchen chair
5. try to get around my feet/legs, being a trip hazard--she likes her "personal space"
5. meow much--except at 6 am when her food bowl is empty and it's time to eat

She is a sweet girl so we'll see how this goes. Wish she could tell  us her story, I'll bet there were some adventures in her young life.

Email ThisBlogThis!Share to TwitterShare to FacebookShare to Pinterest
Labels: Goldie the cat