While in San Antonio last week, we took a brief, unplanned photo stop at the Alamo and got there just in time to see a small group of Army folks gathering.  We were witness to a re-enlistment ceremony.  The officer spoke of the service and sacrifice of the family--his wife, children and parents were among the crowd.  That always chokes me up.  "They also serve who wait at home".  It was a very special moment to be a small part of.  The crowd cheered and  applauded after the oath--an oath that means a lot to me too. 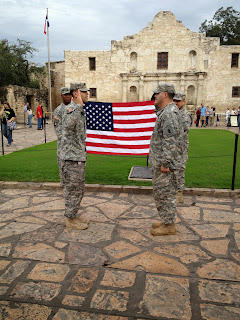 Here is a salute to all veterans, the unknown and the many I had the honor to serve with in the United States Marine Corps--Semper Fi!

Posted by Barbara Black at 7:11 AM