Stars in a Time Warp with John Hewson

I am on a roll with this quilt: 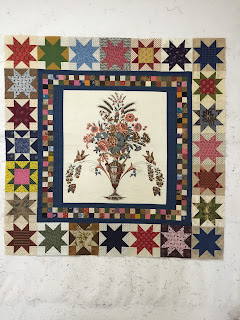 The star blocks are from the wonderful Barbara Brackman's Stars in a Time Warp Quilt-Along-from 2015.  Find more info here.  Along with the weekly fabric choices, she provides so much historical information about quilitng fabrics,

Throughout the year, there were also suggestions for setting designs.  I made 2 of each block so have over 100 blocks to use.  I love medallion style quilts and have made several.  I remembered I bought the John Hewson Medallion panel a couple years ago, and fortunately could even find it.  This is the perfect center for me and this quilt.

John Hewson immigrated to Philadelphia from London about 1774.  He was a textile manufacturer who was known to make the best quality calico fabrics. He custom designed prints for Martha Washington, wife of George.

I was born and grew up in Philadelphia, where Colonial History is a big part of elementary and secondary education.  Some of the places John Hewson lived and had his business are still there today.  And the Marine Corps was formed at Tun Tavern in 1775--since I became a Marine in 1975 I love that connection too.  John Hewson probably dined a Tun Tavern--it is close to his shop location.
If you Google "John Hewson Medallion" you will find these images.  Both quilts featuring his original prints and reproduction prints are shown here.  There is an entire Pinterest Board on him:  Quilting-John Hewson.  Pretty cool, yes?

Up next are half-square triangles.  I want quite a few but want to sew them as quickly as possible so here is the plan: 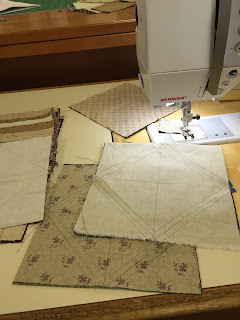 Eleven pairs of 6.5" squares, dark and light,
draw a 3" grid and diagonal lines through the four squares.
Sew on both sides of the diagonal lines 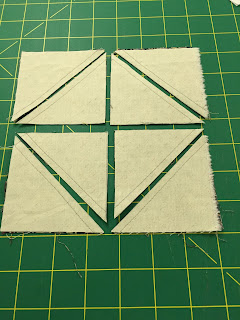 Cut apart on the drawn lines, press toward the darker fabric 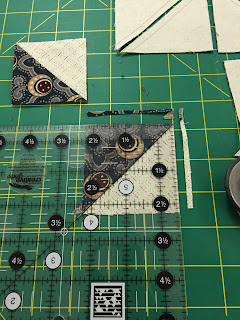 I designed this in EQ7--still haven't settled on all the pieced borders yet--they will come together as I get to them. I also didn't worry about putting all different color stars or search too hard for a medallion for the center.  Using EQ7 for this quilt is mainly to help me organize and plan the solid fabric and pieced borders, working out what size each will be. 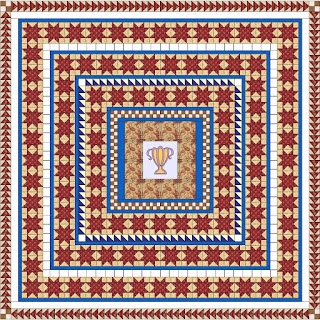 The blue border stripe print I am using for "floater borders" is from Barbara Brackman's Union Blues collection--that was just serendipity. 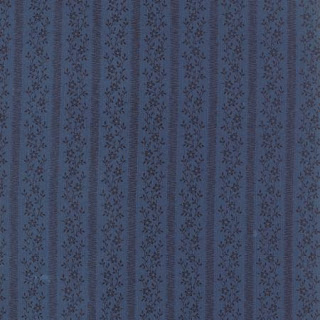 This month was going to be very busy. Yesterday I got 5 days back later this month that were going to have me out of town.  SO, I decided this is the perfect month to get this large quilt top assembled.  Check back as John Hewson grows.