While making the Southern Star quilt I wrote about here and here, I used black Mettler 100% cotton 50/3 thread.   For the last several years I have pieced exclusively with Superior's Masterpiece 100% cotton 50/3 or Aurifil's MAKO NE 50/2 thread.   I also have a supply of inexpensive cotton thread sold on large spools: 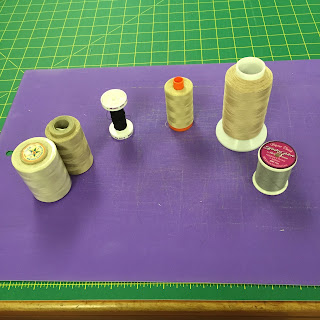 Here is what I learned from the experiment I didn't know I was doing:

1. Thread size matters--the Mettler thread is thicker than the Masterpiece or Aurifil

2. With thicker thread I needed to make my seam allowances smaller, just a bit

3. Masterpiece and Aurifil create less lint in the bobbin area

4. Masterpiece and Aurifil put much more thread on the bobbin, less refilling of bobbins

6.  It is possible to use different machines on the same project.  I sewed at the Retreat on my Ruby Red Singer Featherweight and at home on my Bernina 630.  Just check your seam allowances between machines to be sure they are the same.

7. While this top was not paper pieced, I know from prior experience that I want to use ONLY the finer thread, Masterpiece or Aurifil, when paper piecing.  The added thickness of heavier thread really distorts the finished product when sewing on paper as well as two layers of fabric. And use a small stitch, 1.5 or so, when paper piecing.

8.  And a big tip I did not follow this time but will in the future:  when sewing primarily Black fabrics, use Navy Blue Thread.  When sewing Navy Blue fabrics, use Black thread.  When you have to "unsew" and we all do some time on each project, right?, it is oh, so much easier to see the navy thread on black.

9.  When sewing very light to very dark fabrics, use the darker thread color, or close, like navy on black, not the lighter fabric color.  If you must sew using a light thread on a dark fabric, make your stitch length shorter than normal--you don't want to see the stitches in the seam allowance from the front of the quilt.  This was a Judge's tip I learned when assisting a judge.

10.  I'll use the inexpensive thread for basting, maybe machine quilting charity quilts, or other uses where precision is not important, like string piecing.  And I will have to clean out the bobbin area at least with EVERY bobbin change, it is very linty!

All in all, like with most things, you get what you pay for.  As good thread is now about $13 a spool you don't want to waste it.  Use a "thread kitty", a "starty/stoppy" or a "leader/ender" project to save thread.  I wrote a bit about that here.  More on that another day.

NOTE:  because I use Masterpiece primarily, I buy it on large 2,500 yard cones:  that's more than 4 times the 600 yard spools.  Most quilt shops would be delighted to order cones for you, just ask.  If you don't support your local shop, don't be surprised when it's gone--just ask any quilter who doesn't have a shop within a two hour drive, but who used to.  They are sad.

Barbara
Posted by Barbara Black at 7:21 AM