It's December 1 and I just finished the October borders for "Rajah Revisited", the 2016 Block of the Month from The Quilt Show. 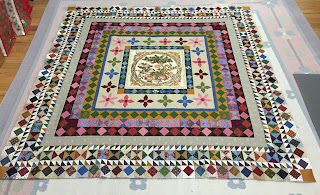 Next up are the final outer applique' borders.  Two are cut and await hand applique'.  I don't have enough fabric for the final two though I have something close.  If my local shop has the fabric, I'll buy enough to finish.  If not, the close one will be used.  The women on the ship didn't run to their local quilt shop for fabric, they used what they had.  Works for me.

Here is  info from the website about this quilt:

It was sewn by women convicts on board the ship Rajah traveling from England on April 1841 to the penal colony of Van Diemen's Land-now known as Tasmania.  The original quilt measured at approximately 128" x 128", but this version is recreated it in quarter scale with fabrics from the designers' stash. The designer, Leesa Siegele,  used many different scraps, imagining that's what might have happened when the original quilt was being made.  She followed the colors of the original quilt loosely, and tea dyed fabrics that didn't look old enough.

The entire twelve month set of instructions for this quilt will remain available for members until December 31, 2016.  There is so much great information on The Quilt Show and the BOM alone is worth the $42.95 annual membership.  Every two weeks a new 1 hour show is released and I always learn something from each one.  You can be an Basic member for free but being a Star member is the best use of your time and money--in my opinion.  No connection to TQS other than being a perfectly satisfied paid member since the inception of the show.  The 2017 Block of the Month is a Sue Garman design, another fantastic medallion quilt I must not start--until I finish the 2011 quilt she designed, Ruffled Roses.  2017 is the year to finish that one, see my progress here.

Of course, I'm still plugging away at Stella's Splendid Sampler.  Block 84 was released today--I'll make it tomorrow.  Then just 16  more to go: 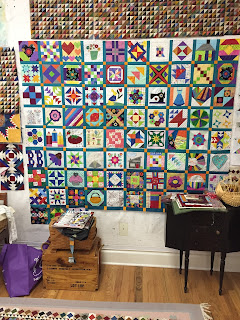 Posted by Barbara Black at 1:32 PM