Last year I made two quilts of valor for special Marines I know. One is my husband, Major Charles "Will" Wilkins, USMC Retired, and one is a long-time friend of his, Major David Aday, USMC Retired.

I had hoped to have the quilts awarded to these men at the 2020 Veterans Day celebration but that event was canceled due to COVID.

Quilts of Valor are awarded to the recipients, not just given to them, as they are not charity quilts but are a gift meant to wrap the veteran in a warm hug. As the Quilt of Valor website says:

"A Quilt of Valor unequivocally says thank you for your service,  sacrifice., and valor in serving our nation."

Last month I learned the program for July for my guild was to be about Quilts of Valor. I asked the person doing the program if we could award the two Veterans their quilts as part of the program--without making this known in advance. She was happy to have this addition to her program and I was thrilled to finally have an official way to award the quilts. Time was passing quickly and if this hadn't happened I was just going to have to give the men their quilts privately.

I contacted David's wife and arranged for her to get him to the meeting as well as giving me dates and information I needed about his 25 years of service. When he started asking questions, she told him it was a secret, he was going to a quilt guild meeting at my request and it was a secret so NO more questions.

My husband knew something was up when he was also told his appearance at the meeting was required.

April read the story of two ordinary men who have lived extraordinary lives. Both came from  humble beginnings and enlisted in the United States Marine Corps right out of high school in the mid-1960's. They quickly found themselves in Vietnam after boot camp. Each served several tours of combat duty there. After returning to the States, they re-enlisted. They were both selected for a program that would send them to college for four years while remaining on active duty. It was at Auburn University in the early 1970's they first met each other. Upon earning their undergraduate degrees, they were commissioned 2nd Lieutenants and served many more years as commissioned officers. Eventually they both retired and had successful civilian careers.

Perhaps their most important accomplishment is they are both still married to their first wives. David and Sharon recently celebrated 52 years of marriage and Will and I celebrated 45 years in April. Both have raised good and decent sons and now enjoy life with wonderful grandchildren.

Will's Quilt, first on display for all to see: 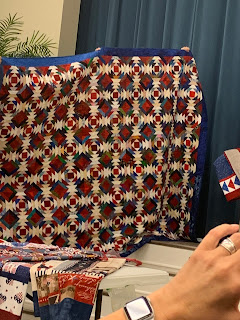 Will being wrapped in his quilt as the award commendation was read to him: 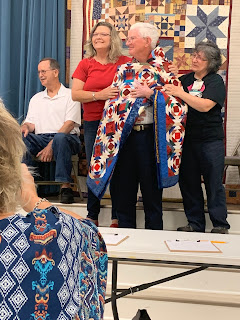 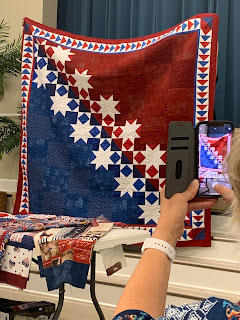 David being awarded his quilt: 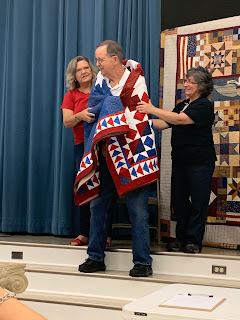 Lest we forget, families of military veterans also serve, whether through multiple moves or time away from their spouse or parent.  Here are April Goss along with David and Sharon Aday: 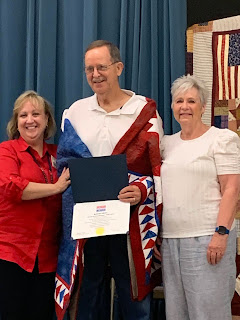 And my husband and I with April: 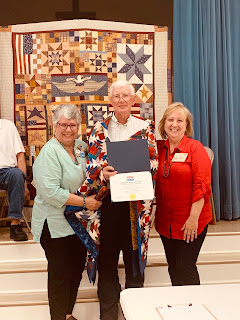 April has established an organization called the Liberty Piecemakers of Huntsville. The purpose is to make and award Quilts of Valor to local veterans. Several sew-ins are planned in the coming months to get quilts made so this can become a reality. April is a veteran herself, the daughter, wife and mother of veterans. She will do a great job with this wonderful effort. You can tell from her smile, she was excited to have these first two awards accomplished.

I have written about these quilts before. For pattern information see this blog post: First Quilt of Valor

For more information on the Quilts of Valor Foundation, see their official website: Quilts of Valor. If you are local to Huntsville, AL consider joining April in her project to award as many local veterans as possible. Her organization would love to have your help.

Posted by Barbara Black at 4:00 AM