Two of the Round Robin quilts being made in the Sunday Sew and Sews are now complete. Meaning, they will be returned to their owner and she can decide if it is done or is worthy of more borders. 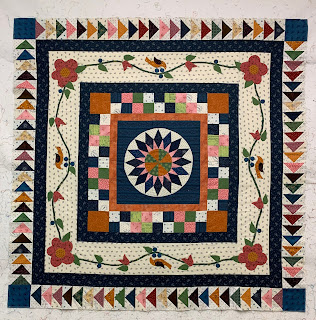 I've been pondering what to do next. Here are some ideas:

I will probably try a few sample blocks of some of these ideas to see what I think.

The last one I worked on is also done and ready to be returned to Pam E. It's 41"square now: 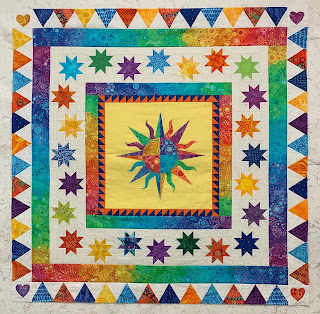 Pam began with the Sunburst center from "Trip Around the Sun" by Material Girlfriends. The first person added the 1" sawtooth border. The next person added the lovely dancing stars border--one of Sue Garman's borders from Stars for a New Day. A "floater" border made everything fit just right.

I added the Dogtooth border and "floater" to make it fit. That paper-pieced border is one I designed for an upcoming project and it was exactly half the size I needed for Pam's quilt. So I made 8 of them, joined two each into a single border and had just what I needed. The four hearts in the corners kept the corners simple.

There are 8 of us working on these Round Robins, four in each group. If you get much more than 4, the quilts start to get really big. Everyone has until the first Sunday in November to finish the one they have so there will be more to show then.

I wrote about how to organize this kind of project in detail. Find that post here: How to Organize a Round Robin