Afternoon Delight, designed by Sue Garman, was the 2020 Block of the Month quilt for The Quilt Show. Many people made it and it is a beautiful design. Forty applique' blocks, 9 Shoo Fly blocks and 64 Double 9 Patch blocks, each with 45 tiny squares, each 3/4".  The Double 9 Patches seemed to do most people in, about 3/4 of the way through. There are just so many of them.

I made two of these--the original for the taping of The Quilt Show and a smaller one so I had step-outs for the year-long blogs I write in support of the Block of the Month for The Quilt Show:

One of the Sunday Sew and Sews, Janet, had a plan that was sure to be easier. At our February 2020 meeting, she had a  sparkle in her eye and a big grin as she showed us what she was going to do. Here is Janet that day, in the red blouse, seated in the comfy chair usually reserved for her: 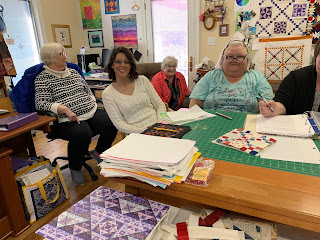 She had a plastic box filled with beautiful fabrics. Printed yardage featured a floral pattern with hummingbirds. The design was a good size for making Afternoon Delight--WITHOUT applique: 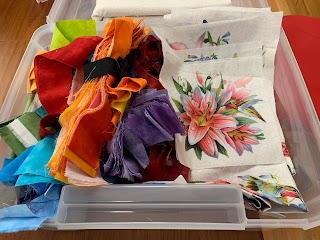 Just a few weeks later, Janet died suddenly from a stroke. The Sunday Sew and Sews helped her daughter deal with an unbelievable stash and complete a BIG project of making 50 charity quilts Janet had started. I wrote much about all this several times last year:
Tribute
Legacy

When it came to the sale, I snapped up that plastic box, full of Janet's planned "Afternoon Delight Made Easy".

This week I started working on it. The floral designs were able to be cut into 7.5" squares. In the box was a soft yellow print that I used to enlarge those designs to 9" finished squares by adding a 1" finished border to each floral design. There is a large amount of off-white print fabric for making those blocks. 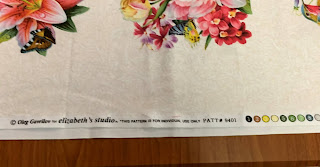 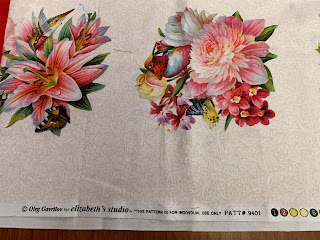 There is also a LOT of an companion fabric to the floral panels I will use for border and backing. Janet bought fabric in HUGE amounts and I am glad she did for this project: 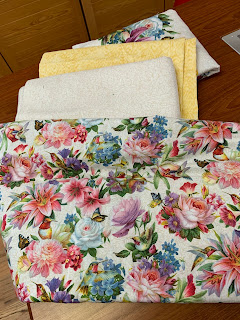 The Double 9 Patches are still daunting, but they are made from 1" finished squares so not too bad.

I have decided to make this about twin size and will then pass on the box to another Sunday Sew and Sew who wants a Hummingbird Afternoon Delight of their own. My progress so far: 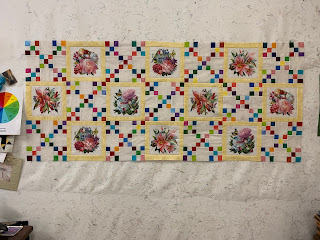 It is a great "Leader/Ender" project, using strips to make various combinations of 9-patches: 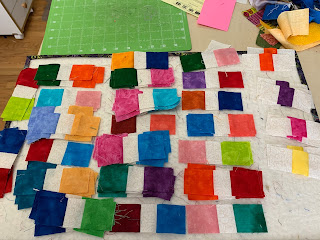 Little known fact--20 years ago when we built this house, I named it "Hummingbird Hollow". Each year I eagerly await the return of the beauties. Our feeders are up and they should show up any day now.

Janet would be pleased her vision is coming to life. She wasn't about to make 40 applique blocks when she had these beautiful floral bouquets, complete with hummers.